The filament of facebook shimmers with pictures of pots of borscht that people have prepared for the first time in their lives thanks to quarantine self-isolation. Last summer the team of the Mobile Cultural Center Gurtobus, together with renowned local chefs, cooked and sampled borsch according to local recipes in twelve towns and villages around Ukraine. The project invited visitors to workshops and film screenings and then to have a meal and to fill in questionnaires about local recipes and the culture of borscht.

As part of the Gurtobus’ interactive gastronomic study project, we are continuing a series of weekly borscht recipes from all over Ukraine! The full results of the project will be published in our forthcoming anthropological report and interactive map, and you can help by providing data for the next study cycle in our borscht survey!

In the meantime, we invite you to take part in our online challenge #borschInaction. Each week, we will feature a recipe from the chefs of the towns and villages we have come to, and you can share your own family borscht recipe with photos and the #borschtinaction hashtag on Instagram or Facebook! 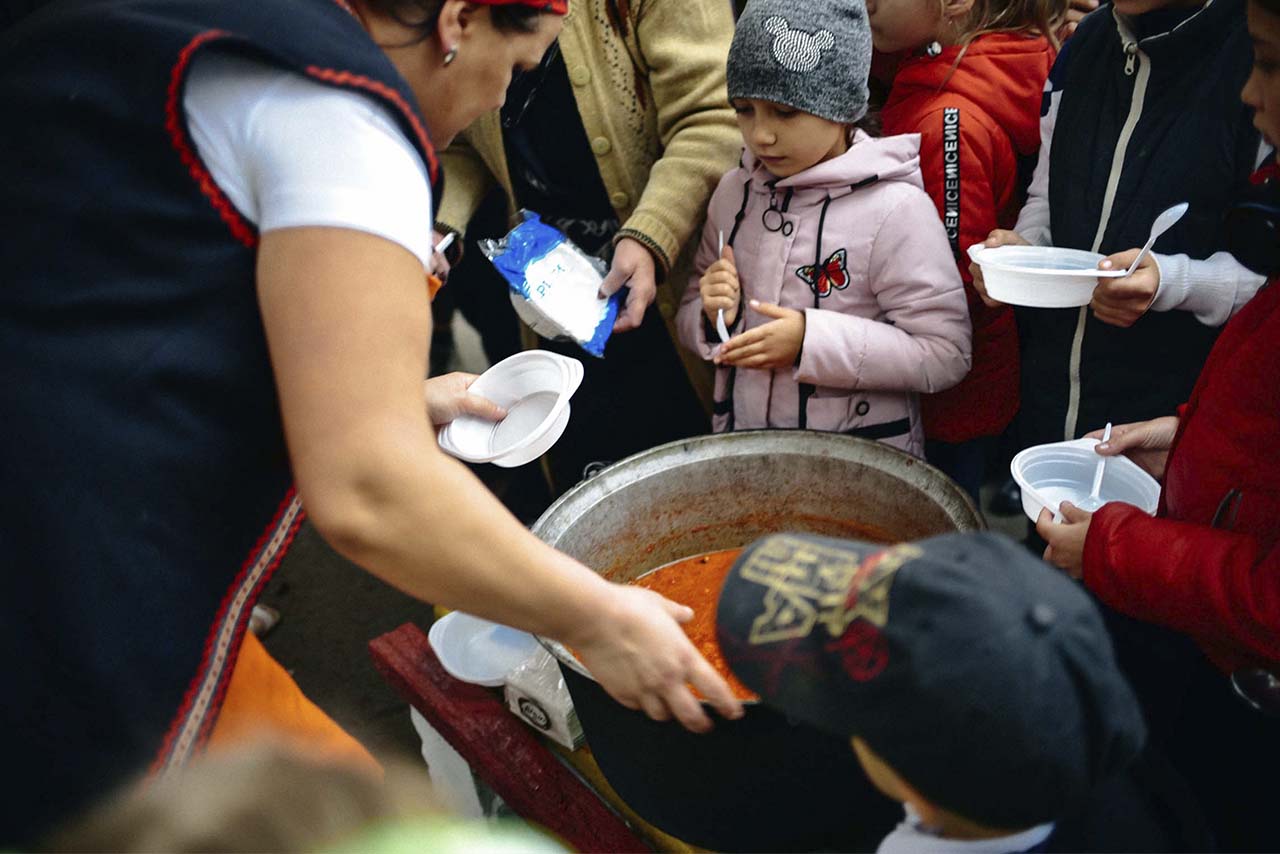 This week’s recipe is from the town of Smila in Cherkasy region:

Real Smila borscht is delicious, fragrant, thick, chunky, and a rich red color. Zatirka* is the highlight, but everything else in the recipe is commonly used.

Take pork on the bone. Wash well and place in a pot of water. The water should be cold, so it absorbs all the taste of the meat. Put the pot on high heat. After boiling, carefully remove the foam (to make the broth clearer), reduce heat and simmer the meat over low heat for 30 minutes.

In the meantime, prepare the vegetables: peel and cut the potatoes and onions, peel and grate the beets and carrots, peel and crush the tomatoes, shred the cabbage. In a frying pan fry the bacon, remove the rind.

After boiling the meat for 30 minutes, pour out a cup of broth. Use this broth to boil a small pot of chopped potatoes (boiling them in broth will infuse them with flavor). Cook the rest for another half an hour, then remove the pork, separate the meat from the bone and put it back into the pot. You can give the bone to Fido to sharpen his teeth on!

Once the cabbage is boiling, put the zasmazhka into the borscht pot. Salt to taste, add bay leaf, ground black pepper, and sweet paprika. Bring it to a boil and then simmer over low heat.

Now prepare the zatirka*. Grind the fat with a blender, meat grinder, or grater. Add grated garlic, chopped dill and parsley. Everything should be carefully ground with a mortar and pestle, adding the broth we poured into the glass until it reaches a homogeneous consistency. There should be no lumps, just a thick consistent mass.

Remove the bay leaf from the pot. When all the vegetables are done, put the zatirka in the pot. Ideally, once the zatirka is added the borscht should only boil for 15 seconds at the most (so it doesn’t lose its fragrance). Together with the zatirka, add finely chopped dill and parsley to the borscht. Close the lid, remove from the heat, let sit for half an hour.

Thanks again to our local partners the Sensoria Charitable Foundation and the Smilianskyi Specialized Boarding School for their help in organizing the Gurtobus events and especially to chef Natalia Viktorivna!

*Zatirka is another Ukrainian word that in English approximates the borrowed yiddish word shmaltz. It is a mixture of animal fat paste with herbs and spices.

**Zasmazhka is a Ukrainian word without a direct English equivalent, meaning pan sautéd vegetables used for soup base.