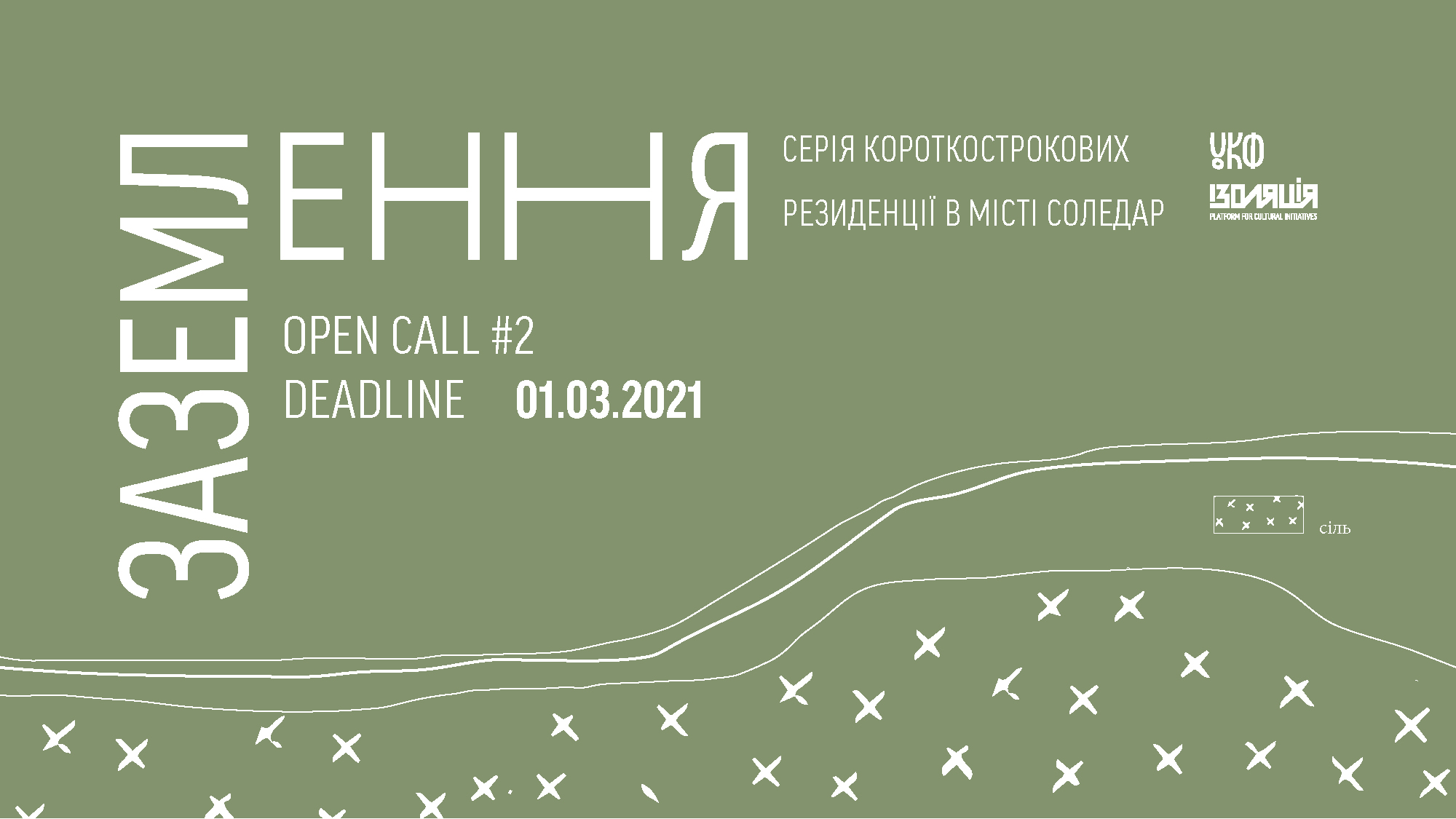 The IZOLYATSIA Foundation, in partnership with the Soledar Amalgamated Territorial Community (ATC) and with the support of the Ukrainian Cultural Foundation, announces the second open call for Grounding short-term residencies in the city of Soledar for artists and researchers, working with the topic of the Anthropocene. Based in the results of the first open call, the following artists will take place in the February and March residencies: Valentina Bero, Nazarii Zanoz, Pavlo Kovach, Oleksii Radynskyi, the duo @shallow_wat and @some_static_pictures, Open Place (Yulia Kostereva, Yurii Kruchak). Applications are now being accepted for the April-August 2021 period.

Since 2019, the IZOLYATSIA Foundation has been working on a research concept, title Grounding, which takes as a starting point the concept of the Anthropocene, a term first coined in the early 2000s by scientists and rather quickly appropriated by different areas of the humanities, one of which was contemporary art. ‘Anthropocene’ describes the geological epoch which contemporary humanity finds itself in: humanity is defined as the central geological force, substantially changing  the planet’s atmosphere, hydrosphere and biosphere. Despite the term’s scientific origins, it is frequently criticized for being unscientific, and a whole array of alternatives are offered, such as Capitalocene, Plantationocene, Chthulucene or the Noosphere, which, unlike the others, was first conceptualized in the 1930s by Vladimir Vernadsky.

The IZOLYATSIA Foundation is entering this discussion and opening a series of short-term residencies, Grounding, in Soledar, a city built around salt mining in a location that is extremely interesting from geological and mineralogical points of view. More information about Soledar can be found in the Soledar Passport which was prepared by the Foundation (in Ukrainian).

Who is invited to apply: Ukrainian (or currently residing in Ukraine) artists, collectives and groups, who work with any media (sound, installation, photography, painting, video, sculpture, participatory practice, research and so on) and academic and multidisciplinary researchers (historians, sociologists, geologists, philosophers etc.) who are interested in the idea of the Anthropocene and its reinterpretations in a concrete location: the city of Soledar and the Soledar ATC.

The Grounding residencies begin in January and last until August 2021. In total, there will be 19 residents (a collective or group is considered one resident). Every month, there will be two one-week residencies. Every resident or group will receive a fixed sum, which will cover travel, accommodation, food and drink, and expenses from undertaking research or creating artwork. The allocation of this money to the different categories will be decided independently by the resident. The IZOLYATSIA Foundation will give the residents logistical support, as well as guaranteeing consultation with local and Ukrainian experts in ecology. The result of every residency should be a public event where the resident presents the results of their work or the artwork they have created. We call upon future residents to think about artistic work in a public space or to draw the community into their research.

Applications for the residencies should consist of a curriculum vitae/resume and an artist’s or researcher’s portfolio, as well as a short (up to 400 words) statement of motivation, explaining why the candidate wants to work with the topic of the Anthropocene, what exactly they plan to do in the Soledar ATC and which month is of most interest to them. All documents should be sent in PDF format to [email protected] with files titled Surname_Forename of the applicant.